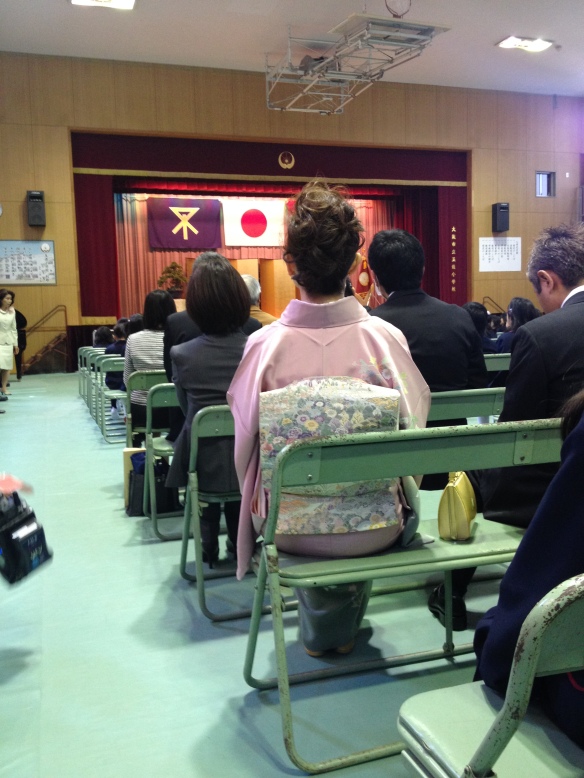 A Japanese school entrance ceremony in Osaka. Where the controversy happens!

Japan’s anthem, Kimigayo, is the world’s most controversial. Although if you hear it – gentle, elegiac – you’ll be at loss as to why.

If you read its lyrics – “May your reign last…until the rocks turn into boulders lush with moss” – you’ll still be at one. And this video of people singing it, which I made while out there, won’t clear things up either. In fact, most people in it look quite happy to be singing.

But Kimigayo is the most controversial anthem there is, and what’s happened around it over the past 70 years is shocking. So read the chapter and learn about it!

The song above isn’t actually the original Kimigayo. That was written around 1869 by John William Fenton, a British (or Scot or Irish – no one seems able to make up their mind) military bandleader who was teaching at the beautiful Myōkōji Temple in Yokohama.

Unfortunately for him, he got the tune wrong – when his music goes up, the Japanese words should go down, and vice versa – so it had to be overhauled.

The temple still performs Fenton’s original once a year so here it is for your listening pleasure.

Kimigayo isn’t the only anthem embroiled in conflict by any stretch of the imagination. Whenever there’s strife, anthems tend to be there, sung by each side in an effort to prove they’re the ones acting in the country’s best interests. Here, for example, is Ukraine’s being sung at the Euromaidan protests (yes, the woman on the stage is far better than the crowd):

Then there’s those that seem to be caught, like Japan’s, in endless rows: Canada’s for excluding women (the English version contains the phrase “in all thy sons command” rather than “in all of us command”); Spain’s, because it’s regularly booed by Catalans; Israel’s Hatikvah (The Hope) for excluding Israeli-Arabs who make up 20% of the population (it features lines about how people’s “Jewish soul still yearns…to be a free nation…in the land of Zion”); and India’s Jana Gana Mana which seems to sparks lawsuits every other week (there are a bizarre number about whether it should contain the word Sindh or Sindhu).

But here’s Hatikvah, as it’s the most interesting of those, and also because it’s solemn and elegiac in a similar way to Kimigayo:

I would have actually liked to have posted the version that features in this BBC radio clip of Holocaust survivors singing at Belsen just after being saved, but it’s really upsetting and I thought people should have a little warning. Please click through, though, if you’re interested.

This chapter actually has a lot to do with World War Two, unsurprisingly for any issue involving Japanese nationalism, which means it also talks about the anthems of Germany and Italy (p105-106).

Germany’s Deutschlandlied was originally a song by Haydn for Austria‘s emperor. You’ll know the melody and you’ll know all about its old words (“Deutschland, Deutschland, über alles / Über alles in der Welt“) so it’s a bit pointless me posting that. Instead, below’s a section of Haydn’s ‘Emperor’ Quartet (Op. 76, No. 3) in which it features. This version somehow strips the melody of all its pomposity, revealing an unexpected fragility at its heart.

After the War, East Germany went its own way with the euphoric Auferstanden aus Ruinen (Risen from Ruins), a song with lots of lines about how “unity can be won”, showing everyone’s expectation that Germany wasn’t actually going to be divided long.

Its music is by Hanns Eisler, the composer who worked with Bertolt Brecht, fled to the US after their work was banned by the Nazis, became a name in Hollywood and then was promptly deported after being interrogated by McCarthy’s Un-American Activities Committee and labelled a Communist. For some idiotic reason I don’t mention him in the book, so here’s the anthem in a poor attempt to make up for it.

In a way, I feel it’s a real shame that Germany didn’t take that as its united anthem after the Berlin Wall fell. But I suppose its climatic lyrics – For we shall attain a tomorrow / When over our Germany / There is radiant sun – implies the current state of Germany isn’t great, which I doubt any chancellor would appreciate!

Italy didn’t undergo so many anthem changes post-war. It simply got rid of its instrumental royal anthem (Marcia Reale) after becoming a republic, and stopped playing Mussolini’s anthem Giovinezza – ‘Italians have been remade / Mussolini has remade them’.

It replaced them with the great Hymn of the Italians (Il Canto degli Italiani), which should have been the anthem all along. Written in the 1840s during the struggle to unify the country. Michele Novaro’s music is fantastic, if so overfamiliar now some people mistake it with the music from Cornetto adverts.

Just a final thing. On pages 108-110, I talk about an incident at a high school where students refused to sing Kimigayo. I say it became a national sensation, so much so that manga artists drew comics about it featuring students raping each other – the implication being that if they refused to sing the anthem, this is what they’d be doing next. I realise that’s somewhat unbelievable, so here’s the evidence. Apologies for your eyes. 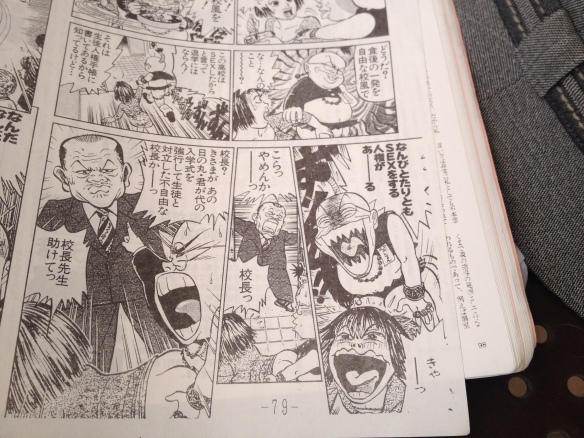 I probably should translate the Japanese, but trust me, it’s best you don’t know!